This is a concept/ phenomenon I find really cool.  As mountain ranges grow by near- or far-field plate convergence, the added weight of the range flexes the earth’s crust downwards, analogous to placing a heavy weight in the center of a 2×4 that is supported at either end.  At the leading edge of the mountain range this downward flexing of the crust creates a foreland basin, where sediments eroded off of the mountain range get deposited.

Now imagine this-  the mountain range is growing and expanding laterally, and propagates into its foreland basin.  What happens next is that sediments/ sedimentary rocks that were once part of this basin are now thrusted/ folded/ deformed and incorporated into the growing mountain range.  So rocks that were once a basin are now mountains.  In other words- the basin was inverted.

Here’s a picture of exactly that.  This is the town of Jety-Oguz, on the south side of the Issyk-Kul Basin in northern Kyrgyzstan.  To the south (left in the photo), the growing Terskey mountains are propagating northwards into the basin.  The red sediments in the photo are late Cenzoic foreland basin deposits, now uplifted and tilted northwards as a direct result of the growing Terskey range.

And the bedrock tor I promised.

Of course if I REALLY wanted to post a good photo of spheroidal weathering, I should make a trip to the Alabama Hills or Joshua Tree…  but that’s hard to find time to do while finishing up a Ph.D.

Anyway, this is a slowly eroding bedrock (quartz monzonite) tor in the Mojave Desert.  Granitoid rocks often erode by granular attrition- where chemical and physical processes break off one grain at a time.  Since weathering processes and rock surface area are directly related, areas with greater surface area (like corners or where joints/ fractures intersect) will have weathering concentrated there.  Over time, this will smooth or round out the corners, giving the rocks a spherical shape- hence the name “spheroidal” weathering. 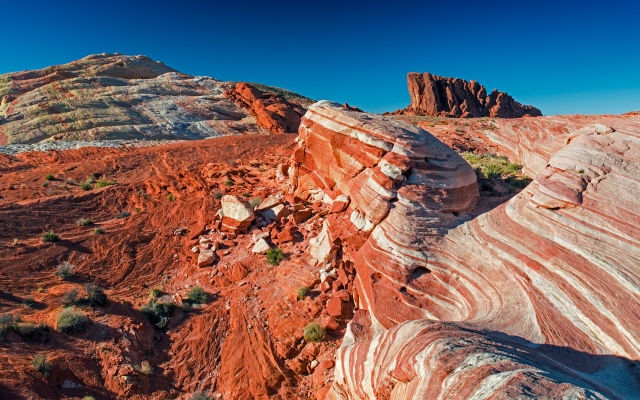 There’s a classic rule in structural geology called the “Rule of Vs”.  Roughly stated, the outcrop pattern formed by dipping strata interacting with topography will form “V” shapes.  Generally, these “V”s will point down-dip in valleys, and up-dip on ridges.  Of course there’s a lot more to this rule, but we don’t need to go into that detail here.

Here’s a photo from the Valley of Fire, Nevada, showing the “V” shapes that have formed in these dipping sandstones.  The late afternoon December sunlight really helps illuminate the “V”s.  Yes, pun intended. 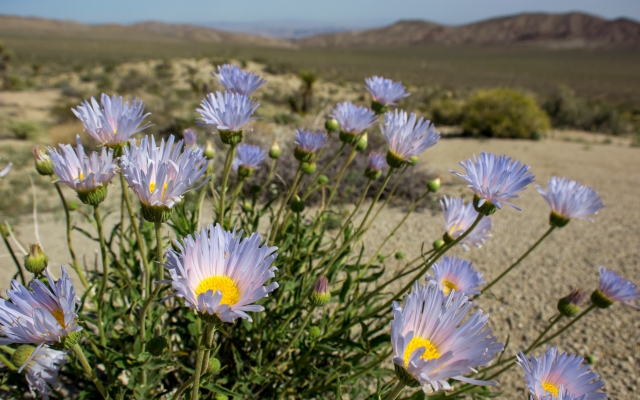 Here’s a part to the Mojave desert a lot of people don’t really think about (or even know exists, really)- the Rodman Mountains Wilderness.  Nestled a short ways south of I-40, it is home to some spectacular geology.  Part of the basement rock is a Mesozoic “granite” (well, quartz monzonite if you want to be specific), and in many places this “granite” outcrops as slowly-eroding tors.  These tors come in two flavors- convex lumps mantled by a thin, grus soil (as seen here), or knobby rock outcrops with great examples of spheroidal weathering.  Hey, I just got an idea for a future photo to post…

The soil-mantled tors can support just enough vegetation to look pretty.  Especially so for a week or two in early spring when the wildflowers are in full bloom.

Even more- the Calico fault, one of the major players in the Mojave part of the East California Shear Zone, is at the base of the ridge in the upper-right part of the picture.

At an undisclosed* location in Nevada, big Oligocene-Miocene ignimbrite sheets have been displaced by normal faulting related to dextral transtension in the Walker-Lane belt.  This is pretty much the western extension of the famous Basin and Range province, a very broad region of crustal extension reaching from the Wasatch front in Utah all the way to eastern California.  Ha, and “color-coded” stratigraphic units are always nice.  How many faults can you find in the photo?

*I’m not saying where this location is exactly, because it’s a popular spot for undergraduate/ graduate mapping exercises.  Keep the students on their toes.

Here are links to the image for different desktop resolutions (by aspect ratio), link opens in a new window:

Though not the tallest or best known of the Cascades volcanoes, Bailey (at ~8370 ft) in southern Oregon is still nothing to shake a stick at.  The mountain itself is a broad andesitic and rhyolitic tephra cone resting on top of a basaltic shield volcano, located just north of the more famous Mt. Mazama.  Thick rhyolite ribs make up the summit ridge, seen in this photo here.  Plus, Bailey boasts some incredible backcountry skiing during the winter too. 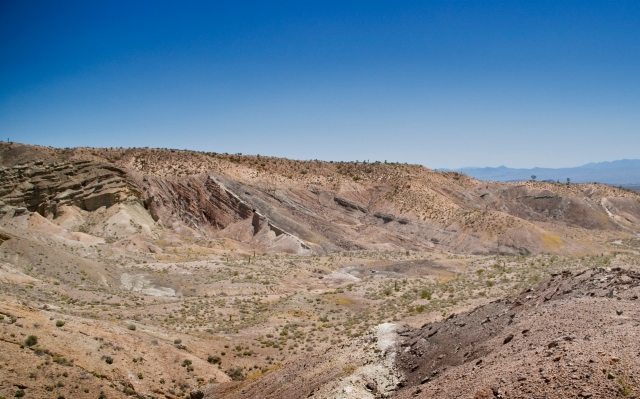 This is one of my favorite places to go visit or mapping.  Just a little ways north of the town of Barstow, California, and adjacent to the infamous Rainbow Basin is Owl Canyon.  From the bit of work I’ve done here, it seems as if everyone who has published a map of this area has a different interpretation.  I won’t go into that can of worms, just show a pretty picture.

This photo shows deformed Miocene and earlier lacustrine deposits, conglomerates, and air-fall tuffs deposited in a supra-detachment basin, capped by Quaternary alluvial fan deposits.  The deformation history here is quite complex- how many different structures can you find?

Figured it would be good to start this off with one of my favorite photos.  Here’s a fault propagation fold from the western Naryn Basin in the wonderful central Asian republic of Kyrgyzstan.

Almost 90% of Kyrgyzstan is the Tian Shan mountains, which reach elevations of 7000 meters and are relatively young (about  20-25 million years, depending on who you cite) geologically speaking.  It’s a simple equation- young, tall mountains equals lots of deformation.

This picture shows deformation in late Cenozoic basin-filling strata in the central part of Kyrgyzstan.  The photo is looking east, and from the fold geometry we can infer that there’s a south-vergent thrust not too far beneath the surface.  There is also another larger thrust or reverse fault in the background- you can see Paleozoic basement rocks (the higher, darker brownish rocks in the upper left) being placed on top of the tan, Neogene lacustrine deposits.